Motion Graphics: Why This Eye-Catching Art Form Is in High Demand

Motion graphics design has long been a part of modern visual communications. Its dynamic elements are used to entertain, explain, and engage with audiences. It’s used in the opening credits and title sequences of movies and television shows, in advertising and marketing campaigns, and in educational and training videos. Motion graphics design not only enhances arts and entertainment but also is an art form in and of itself.

We can hardly imagine visual content without motion graphics, but as modern as motion graphics design is, it has a long history that predates film, television, and computers. Scientists think it’s been around for as long as humans have been telling stories.

What is motion graphics?

The best way to answer the question, what is motion graphics? is to think of it as a subset of the art of animation. Motion graphics takes a static graphic design — an advertisement or infographic, perhaps — and animates the visual elements. Motion graphics designers combine animation with music, narration, and other audio in creative ways to keep viewers engaged and watching.

With the short attention span of most audiences, motion graphics designers have to strike quickly to capture viewers’ attention and get their message across.

The elements of motion graphics design include the following:

Typography is critical to graphic design, and typeface and font help convey a message to viewers. Motion graphics design animates typography, and how it moves becomes part of the message. This is referred to as kinetic typography.

Illustrations, abstract graphics, charts, maps, graphs, cartoons, photographs — all are graphic elements that can be animated in motion graphics design. Designers choose which elements will best convey their message and influence or educate the viewer. As with typography, the choice of graphic element depends on the market, product, and prospective audience.

Audio includes music, narration, dialogue, and sound effects. Motion graphics design incorporates all these elements. Sound is critical to conveying mood, setting a scene, and communicating a message. Designers use audio to add another dimension to motion graphics. 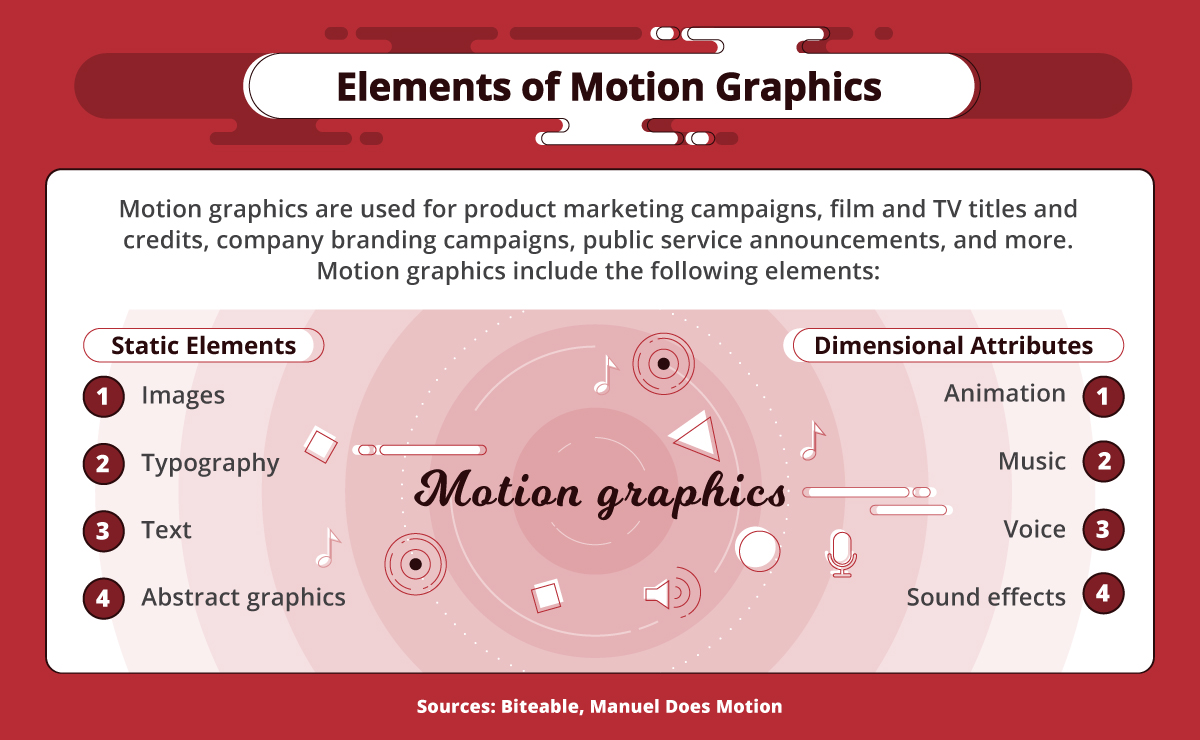 The difference between motion graphics vs. animation

Motion graphics is considered a subset of animation. Admittedly, the difference between motion graphics and animation can be blurry. Both use animation techniques to tell a story. Both incorporate sound to convey emotion, ambience, and meaning. Animation often uses kinetic typography or the animation of other graphic elements as part of its design aesthetic.

However, while animation includes figures and landscapes, motion graphics relies on geometric forms, typography, logos, and other graphic design elements. One test is to ask whether a piece could’ve been made using live action; if so, it’s probably animation rather than motion graphics.

Other broad differences between motion graphics and animation include the following:

The history of motion graphics

Between 45,000 and roughly 14,000 years ago, humans left behind astonishing cave paintings. Scientists theorize that some of these paintings were intended to represent movement when lit by firelight. If this hypothesis is correct, these are the earliest forms of animation and motion graphics.

Zoetropes are cylinders with viewing slits that contain a scroll of a series of images. Spin the cylinder and look through the slit, and the images appear to be moving. The device was invented in 1837 and popularized in the 1860s. The first flipbook (kineograph) was patented in 1868. Flipbook illustrators drew sequential images on each page, and the viewer flipped through the pages, causing the images to appear to move.

In the 1920s, several artists took to the still new film technology to create early motion graphics. These included artists such as Marcel Duchamp, Walter Ruttman, and Fernand Leger. Duchamp created rotoreliefs (spinning drawings), and then filmed them to create a 3D animated effect. Ruttman and Leger created abstract and pop art using film and abstract graphic design. These were the first modern examples of what today we call motion graphics.

The design influence of Saul Bass

Known for his striking title sequences for such films as “Psycho,” “The Man with the Golden Arm,” and “Anatomy of a Murder,” Saul Bass has been highly influential on the field of motion graphics design. He was known for making the design elements work together in exciting and eye-catching ways. Bass has influenced many modern title designers (see, for example, the title sequences of the animated series “Archer”). These designers are making their own vibrant title sequence designs that take motion graphics to new and surprising places. 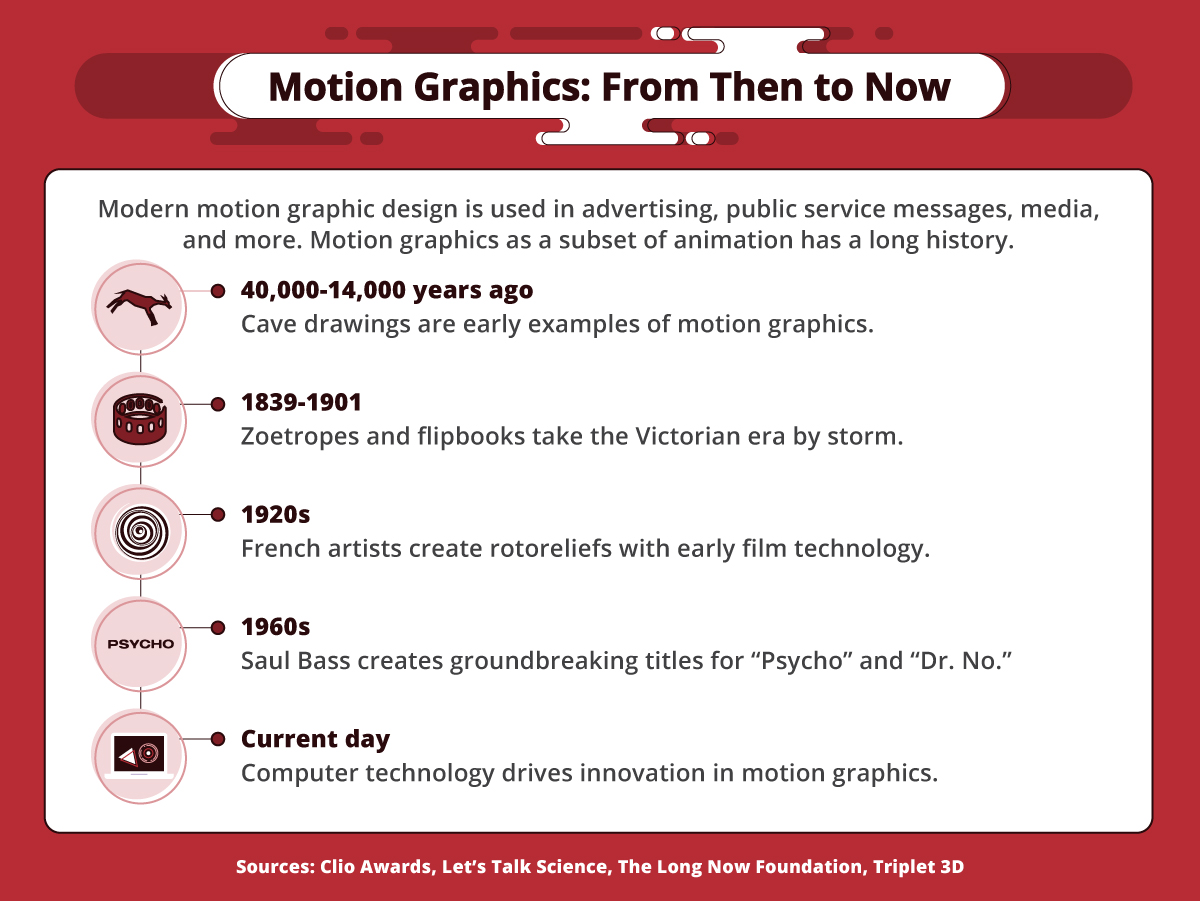 How to make motion graphics

Most designers use computer animation tools to design modern motion graphics, and various powerful software for motion graphic design exists. However, before learning how to make motion graphics, a beginning designer needs to have a solid education in foundational art and design concepts. The most important motion graphics tools are the experience and creativity that a designer brings to the table.

Before designers sit down to create the elements of their motion graphics, they go through a motion graphics development process. The process varies by designer and project, of course, but there are some general steps.

A designer works with a client to put together a design brief that includes the project’s goals; a design aesthetic that matches the client’s brand, culture, and communication style; messaging; and elements such as color palette and logos to be incorporated. After the client approves the design brief, the designer creates a storyboard.

Commonly used in film, a storyboard comprises consecutive images that lay out how the final project will be constructed. The storyboard helps a designer flesh out the design brief and develop a road map for the finished product. Motion graphics designers may use their art and design skills to sketch out a storyboard by hand. Clients can see how the design comes together and request changes or sign off on the design.

In motion graphics design, less is more. Designers identify the elements they’ll use and how they’ll work together. Typography, colors, abstract images, music, sound, narration, dialogue — the designer combines these elements into an effective and pleasing final product. If designers are working with a team, they’ll assign elements and manage the project and workflow.

After doing the preliminary work, designers employ the computer animation and graphics design tools to build their project. Motion graphics software includes scores of features that artists use to create their designs and make them sing (literally, in some cases).

What does a motion graphics designer do?

Besides experience in the art and science behind motion graphics, effective motion graphics designers are well versed in working with clients across many industries. Motion graphics elements are popular in marketing and entertainment, but they can also be found in training, education, safety videos, and news stories.

The following are the top responsibilities of motion graphics designers:

Graphic designers are artists first. Many designers would say that art is the reason they were drawn to their careers in the first place. To make effective motion art, designers need training in the following elements:

After a client has approved the design brief, design elements, and storyboard, the designer shifts into project management. The day-to-day responsibilities of a motion graphics designer include the following:

Motion graphics design is a technology-heavy field. Designers need to keep up with the latest in technology to produce their work. For example: 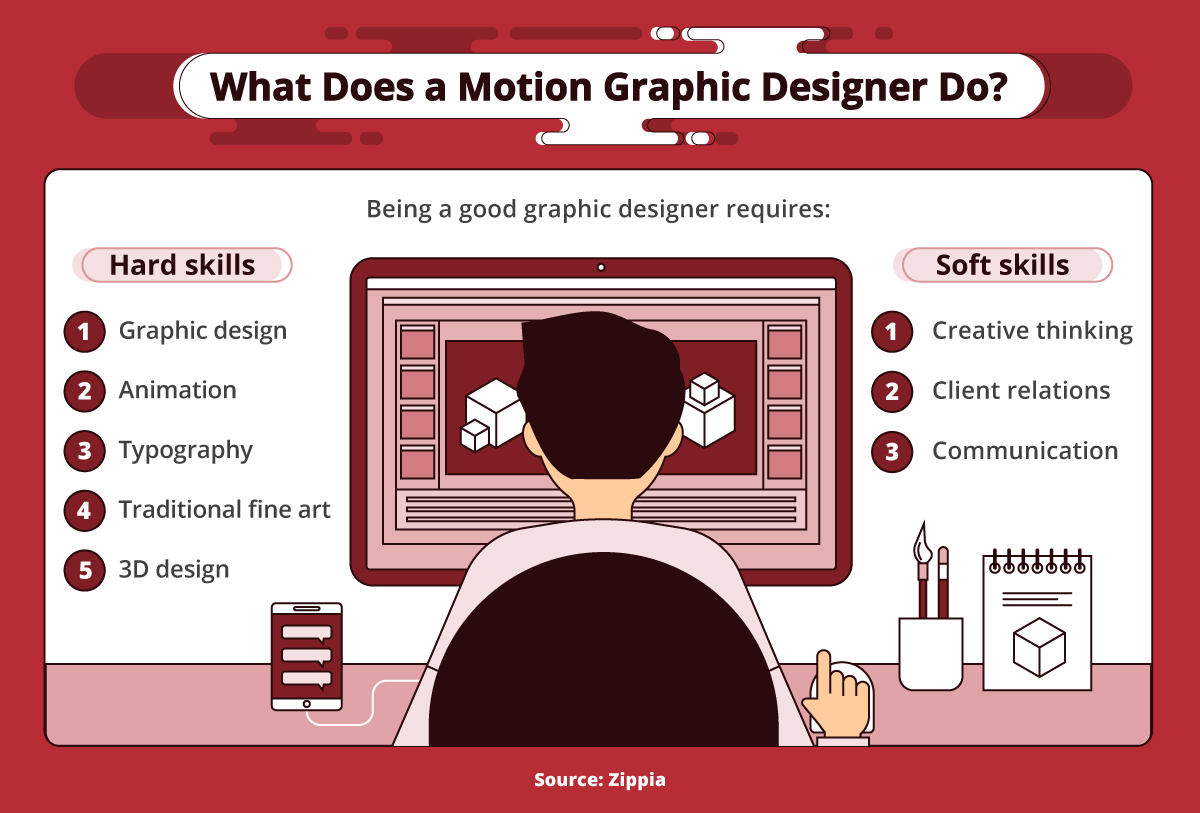 Motion graphics design combines visual arts, graphic design, sound, and animation in exciting new ways. Designers are taking motion graphics to new levels, making even dry content engaging and informational. Powerful computer tools have opened the field to beginners, allowing them to experiment with their own ideas, and experienced designers are pushing the boundaries of what these tools can do.

Although motion graphics design has a long history — perhaps dating back to the dawn of humanity — it’s reached new significance in the modern era. Phones and tablets mean that users can view motion graphics elements anywhere. With this increase in video use, companies have turned to motion graphics to create advertising, educational materials, entertainment, and other products to get their message across with style and substance.

Next time you’re watching your favorite show, pay attention to the title sequences. If you’re doing training for work or school, notice how a video uses animation, typography, and sound to get its message across. This is the art of motion graphics design: communicating a message so a user can easily grasp its meaning, using art and animation to make the information pop off the screen.

Manuel Does Motion, “What Is Motion Design/Motion Graphics?”

The Long Now Foundation, “Paleolithic Cave Paintings Appear to be the Earliest Examples of Sequential Animation and Graphic Narrative”

Triplet3D, “The History of Motion Graphics”