Right now, nurses are responding to crisis situations around the world. Pandemics, tornadoes, hurricanes, brush fires, earthquakes, and human-made disasters test even the most highly skilled professionals. Beyond the emergency room and hospital walls, nurses may find themselves serving in a makeshift triage unit or as part of a response team, picking up the pieces after a disaster.

Disaster response nurses, including nurse practitioners, play a critical role in helping entire communities heal from the impact of events such as natural disasters, industrial accidents, and acts of terrorism. They view their work as an extension of the passion that called them to nursing in the first place. Advanced educational programs, such as Maryville University’s online Bachelor of Science in Nursing to Doctor of Nursing Practice degree, can help nurses gain the skills to deal with front line crisis situations. 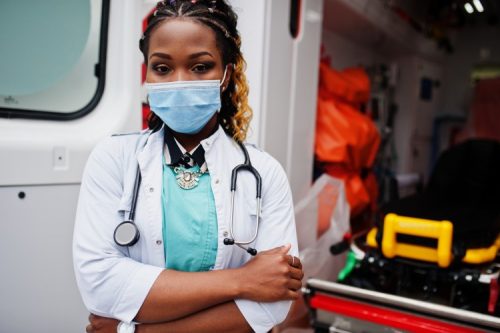 Common Crisis Situations for Nurses on the Front Line

Disaster nurses aid civilians in the aftermath of a variety of natural disasters, such as earthquakes, wildfires, tornadoes, and hurricanes. Volunteer registered nurses (RNs) and nurse practitioners (NPs) also lend their time to help pandemic response teams, in addition to providing aid to those affected by human-made disasters, such as the August 2020 explosion in Beirut.

National Nurses United reports that in years past, RNs who have volunteered during California’s wildfire season have not only cared for burn victims, they have helped evacuate patients to surrounding hospitals. Wildfire volunteer RNs also provide first aid to evacuees in a variety of settings, such as churches, medical clinics, and campgrounds.

Nurse disaster action teams often deploy to care for individuals who have been displaced by tornadoes. Although the primary responsibility of most tornado volunteers is to provide care to evacuees, when disaster strikes, they may also be asked to aid affected medical personnel.

In March 2020, local and state governments asked final year medical and nursing students as well as retired, inactive, and otherwise available healthcare workers to volunteer their time to help with the COVID-19 pandemic. Forbes reports that at the peak of the outbreak in New York City, 76,000 healthcare workers stepped up to volunteer, including more than 30,000 RNs and nearly 4,000 NPs.

In August 2020, a massive explosion at a seaport in Beirut killed more than 200 people and injured more than 6,000 others. In the aftermath of the blast, caused by a fire at a chemical warehouse, 30 Lebanese Red Cross teams, including nurse volunteers, mobilized to set up triage and first aid stations throughout the city.

A number of nonprofit organizations offer volunteer opportunities for nurses. The best-known organizations include the American Red Cross and the RN Response Network.

The American Red Cross has a volunteer network of more than 15,000 nurses and nursing students throughout the U.S., all of whom are prepared to spring into action at a moment’s notice. In addition to disaster response, these nurses are also trained to serve their local communities through health and safety education such as CPR classes, and program development efforts for the organization as a whole.

In addition to serving their hometowns, Red Cross nurses deploy to other locations in times of need. Whether the disaster scene is a few states away or on the other side of the globe, these nurses are ready to help with the recovery of a community that is suffering through overwhelming conditions. Red Cross nurses also support America’s armed forces in various capacities.

A second group of dedicated nurse volunteers can be found with the RN Response Network, known as RNRN. This organization was founded in 2005 in response to hurricanes Katrina and Rita, which uncovered fatal flaws in the nation’s disaster response mechanism. Headquartered in California, RNRN is composed of nurses from across the U.S.

Similar to Red Cross nurses, RNRN nurses on the front line mobilize to the site of a disaster to provide support wherever they are needed most. Since their founding, RNRN has responded to a series of high-profile emergency situations, including the Haiti earthquake, the earthquake and tsunami in Japan, and post-typhoon flooding in the Philippines.

Aspiring nurse practitioners, nurses, and student volunteers will be well served by developing a variety of traits and skills, such as compassion, the ability to work under pressure, and the flexibility to work in less than ideal conditions. Individuals who are looking to enhance their nursing skills will find that pursuing an advanced education, such as through Maryville University’s online BSN to DNP program, can provide the knowledge and expertise they’ll need to thrive in a variety of environments, including front line disaster relief.

Are you ready to be brave with us? Discover how Maryville’s online Bachelor of Science in Nursing to Doctor of Nursing Practice degree program can prepare you to provide high-quality care in an uncontrolled setting.