View all blog posts under Articles

In late 2018, Michelle Obama embarked on a book tour for her memoir Becoming, which sold more than 2 million copies in the U.S. and Canada within 15 days of its release and hit bestseller lists around the globe.

Yet during an appearance at a London school, when asked how she felt about being seen as a symbol of hope, the former first lady admitted she still suffers from impostor syndrome.

“It doesn’t go away, that feeling that you shouldn’t take me that seriously,” Obama replied. “I share that with you because we all have doubts in our abilities, about our power and what that power is. If I’m giving people hope then that is a responsibility, so I have to make sure that I am accountable.” 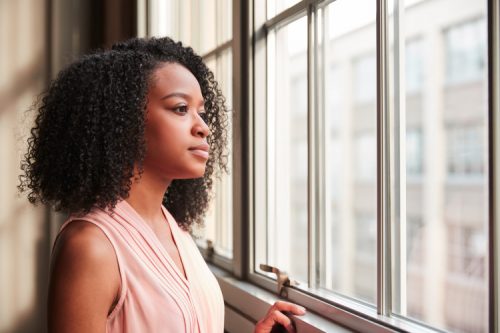 People in all walks of life are affected by the persistent inability to believe their success is legitimate and due to their efforts, knowledge, or skills. While as many as 70% of Americans have experienced these feelings, known as impostor syndrome, research shows a racialized component that intensifies its impact on the mental health of Black individuals.

What Is Impostor Syndrome?

In an article published by Medium, Maryville University associate professor of strategic communication and leadership Dr. Leilani Carver-Madalon defines impostor syndrome as the experience of someone who “feels like a fraud, intellectually and/or professionally. People who are experiencing imposter syndrome feel like they are not good enough, like they don’t belong and/or that they are a fraud, and it is only a matter of time before they will be found out.” The term “impostor syndrome” was coined in 1978 by American psychologists Pauline Rose Clance and Suzanne Imes, who believed that women were less likely to internalize success. Subsequent research has found that impostor feelings are not limited to women, and that they interact with racial discrimination to particularly affect people of color. “Imposter syndrome limits people because they never feel like they are truly successful. Underneath the façade there is often a lack of confidence,” Carver-Madalon continues, adding that another possible downside is that impostor syndrome may prevent people from acting on their ambitions — applying for the “safe job” rather than the dream job — and they may regret that decision in the future.

Why Impostor Syndrome Is More Prevalent in Black Individuals

Black men and women are particularly vulnerable to impostor syndrome, both in the workplace and in day-to-day interactions. In a HuffPost article titled “Imposter Syndrome Hits Harder When You’re Black,” author Jolie A. Doggett notes that for Black individuals, impostor syndrome isn’t just an imaginary voice in their heads.

“We can hear it loud and clear when we receive almost daily messages from society that we truly don’t belong,” she writes. “This feeling of otherness is a common occurrence in the workplace where, too often, we may be the only person of color present.”

Causes of Impostor Syndrome in the Workplace

Causes of Impostor Syndrome in Society

People who struggle with impostor syndrome share several common traits. Prevalent among these are self-doubt, fear of being exposed as a fraud, and an inability to own and internalize success. Others include self-sabotage via procrastination, negative self-talk, and perfectionism.

In some cases, people in a new job or embarking on a career change temporarily experience symptoms of impostor syndrome. However, if these feelings linger, they can negatively impact job performance. This can spur a self-fulfilling prophecy, externally confirming feelings of self-doubt.

Systemic racism can compound these feelings. Black professionals who doubt themselves, even when they’re eminently qualified, are less apt to ask for a raise or apply for a promotion. These feelings are often rooted in measurable bias: for every 100 men promoted into management, only 58 Black women are promoted, according to a recent study from McKinsey and LeanIn. Coqual reports that 19% of Black professionals believe that someone of their race could never achieve a top position at their company.

While oppressive systems and cultures must be dismantled to truly alleviate the high rate of impostor syndrome in Black individuals, there are some steps that Black people can take to ward off impostor feelings.

Learning How to Thrive

Overcoming impostor syndrome can be difficult, but it’s not impossible. Accept your skills, accomplishments, and that your voice deserves to be heard. When you make mistakes or feel unworthy, talk to people you trust about what’s harming your confidence. Focus on the facts, such as your qualifications, instead of your feelings. Flip your script from negative self-talk to positive affirmation. Remember, the most important tip in growing past impostor syndrome is to shift your perspective. You’ve got this.

Know Your Worth: How to Negotiate — or Renegotiate — Your Salary

Year in Review: The Power of Self-Reflection

How to Make a Career Comeback

Coqual, “Being Black in Corporate America: An Intersectional Exploration”

McKinsey, Women in the Workplace 2020

Medium, “Dr. Leilani Carver-Madalon: ‘How One Can Thrive Despite Experiencing Impostor Syndrome’”

O, The Oprah Magazine, “26 Black Americans You Don’t Know but Should”

Time Magazine, “Yes, Imposter Syndrome is Real. Here’s How to Deal with It”

Zora, “Why Imposter Syndrome Is Worse for Women of Color”